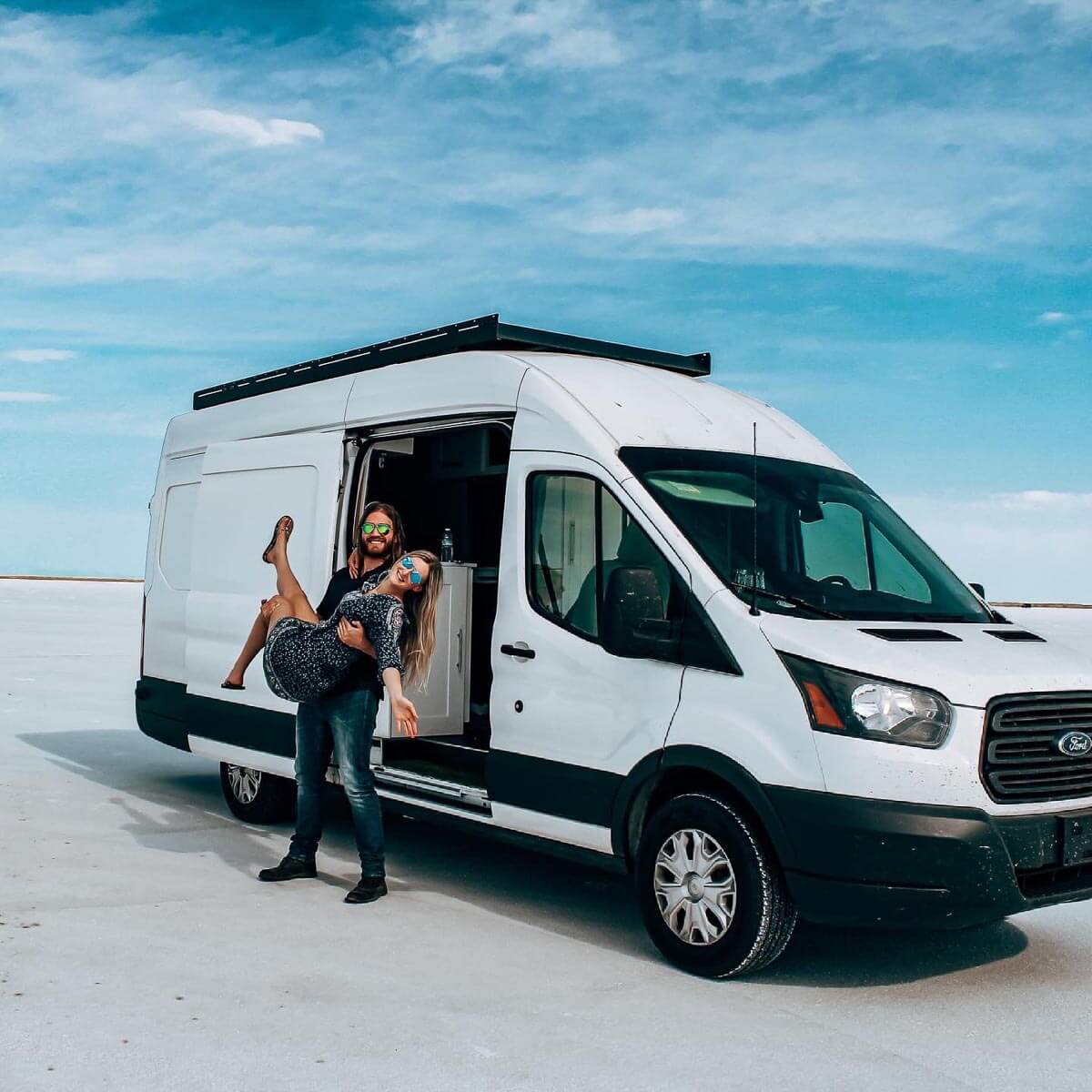 Lauren and Jon are a couple in their mid-twenties that have set off from their home base in Atlanta to pursue #vanlife as an exciting next chapter of their lives. Previously, they were both full-time students.

Lauren and Jon define van life as being able to live the way you want in a home built entirely for you and your specific wants/needs, which is great since Lauren built their van almost entirely on her own (with a little help from her dad at times)!

At the start of 2020, Lauren was diagnosed with Crohn’s disease. Vanlife was something she had always wanted to do and traveling internationally was a huge part of her life.

The pandemic started a few months after she was diagnosed and she felt like if she didn’t do it now, she might not be able to later. So, she started searching for vans online and bought hers in July 2020!

A little less than a year later they would begin living in their van as they set out to see the country in May of 2021 and have been on the road ever since.

This post contains affiliate links to products and services we think will help you best equip yourself to complete your van build. We only include links to products and services that are included in this van build so you can trust our van life community members to guide you in the actual products they have used in their own vans. To read our full affiliate disclaimer, click here.

Lauren and Jon have a 2018 Ford Transit high roof extended length. They chose this van because they are both very tall people (5’9” and 6’3”) and it’s the tallest van you can get!

It’s also the perfect length for them (22ft) because they have tons of room but can still fit it in most parking spots!

The Van At A Glance

Lauren and John have converted a 2018 Ford transit high roof extended length. They purchased the van used for $36,000 but it only had about 13,500 miles on it.

When it came to choosing the best campervan bed option, Lauren and Jon opted for a u-shaped couch that converts into either a full-sized bed OR a king-size bed! To make it a king-size, Lauren and Jon have an extra piece that they use to extend the bed over the kitchen countertops to sleep longways.

They also have a swivel table that accompanies the couch where they work and eat and, separately, a swivel seat at the front with its own table that functions as a desk.

The kitchen is located in the middle of the van such that they have 9 feet of counter space collectively! This includes a 15”x15” top mount sink (wish it was a little bigger), a Wolf convection oven, a portable two-burner propane stove (uses 1lb propane bottles), and a 700-watt microwave!

The kitchen also features a 12V isotherm fridge and freezer that is permanently installed. And to cook food, Lauren and Jon use a two-burner portable propane stovetop that uses 1lb propane bottles.

For their water system, the sink receives water from a 33-gallon water tank and a 4-gallon water heater via a 12-volt water pump. All of the plumbing is located directly underneath the passenger-side countertops under the sink.

In the bathroom, the van has both a Thetford portable camping toilet and a pee funnel! The toilet is used for mainly emergencies but the pee funnel is used 24/7 and is one of their favorite things that they’ve added to the van!

When it comes to showering, the van offers both indoor and outdoor shower capabilities. Inside, there is a waterproof shower pan that has a drain attached and a curtain (so essentially a convertible stow-away shower). But this rarely gets used. However, the same shower head for the inside is on an 8ft hose so can be used outdoors as well!

As for heating and cooling, the van has a Maxx air vent fan for when they’re cooking and a 12V AC unit from Nomadic Cooling for when outside temperatures are unbearably hot. They don’t have any permanent heater installed right now.

Instead, they use a small electric heater that runs off of 120v and it works pretty well for temps above 25 (that’s the lowest we’ve experienced so far!)

Lauren and Jon definitely have a great electrical system setup. The van is equipped with 500 amp hours of lithium Battleborn batteries, 230 watts of solar, a 3000-watt inverter and 230 amp battery to battery charging from the alternator (plus shore power charging).

They didn’t install a permanent propane tank as everything in the van is electric! The only thing they use propane for is their stovetop. But this portable grill only requires the smaller 1lb bottles.

When it comes to improvements or things they would change, Lauren and Jon agree that adding a heater would be great so that they could travel to colder areas in the winter more comfortably.

READ MORE: Check out this post on other great vans for camper conversion.

Previously, Lauren and John were students in Atlanta, Georgia. Jon graduated with a communications degree and Lauren with a doctor of pharmacy. Upon graduation, they shifted into living in their van on both a full and part-time basis. Jon works full-time as an actor/musician and Lauren does some remote pharmacy work.

Since moving into the van right after graduation, they’ve both been working out what they are going to do for money long-term. But they’ve been saving up all throughout school and are using savings for now, as well as travel hacks for their international trips (credit card points mainly).

So far Lauren and Jon say that the best part of van life is the community! It’s amazing meeting people who are so nice that are like-minded and easy to get along with.

And the most rewarding thing about this lifestyle is the ability to just pick up and take off without having to even think about it. You have everything you own. You don’t have to pack or do anything to prepare. You can just start driving and go where ever you want and still have the comforts of your own home!

When it comes to hardships on the road both Lauren and Jon have major anxiety about the future, especially when it’s unplanned. And unfortunately, living in a van means usually not having a plan.

There have been times when they have both enjoyed a planless life. But in combination with their jobs being a bit up in the air as well, they sometimes feel overwhelmed with having no plan at all for the future.

Downsizing their lives into a van was not very difficult for Lauren and Jon. The biggest challenge was mostly just fitting all of their clothes! And there is no debate that washing the dishes is by far the worst part about living in a van full time! They also miss having the ability to buy things online and have them shipped wherever.

Lauren and Jon want people to know that Van Life is definitely not for everyone. And you can’t believe everything you see online. But van life can be perfect for some people and if you want that kind of lifestyle then go for it! Just buy the van and figure it out from there!

But aside from a little help from her father, she built everything in the van, including the cabinets and cabinet doors!

For insulation, Lauren used havelock wool for the walls and ceiling and foam board for the floors. She wanted something natural that wouldn’t absorb a lot of humidity. The van has no windows except the skylight which she installed herself!

For the flooring, Lauren used vinyl tongue and groove planks because they are only 1/4” thick and we’re “supposed” to be scratch-proof. She’s later found that they really aren’t entirely scratch proof and if she did it again she’d get the vinyl sheet flooring instead of planks.

The van has tons of lighting installed, mainly because it doesn’t have any windows. Lauren installed 10 x 12v puck lights in two rows along the ceiling, plus 3 more puck lights under the upper cabinets.

The van also has 12v strip lights under the toe kicks of the cabinets and 12v reading lights by the back doors. And the mirror in her bathroom area has 12V vanity lights around it as well.

In the “garage” area in the back of the van Lauren built pull-out drawers on 500 lb drawer slides to form a picnic table. This setup takes up most of the garage space. But they also have small hidden storage areas throughout the van, like directly above the fridge is a small 2-inch opening that is useful for storing cutting boards!

Lauren is most proud of the van’s ceiling! It was one of the few things that she had never seen done before in a van at the time, and she felt like she really got to use her creative/interior design skills and do something risky but that turned out great! They have real tin ceiling tiles that give it a totally different look and make the whole ceiling magnetic!

When it comes to giving advice to anyone considering building out their own van, Lauren suggests that you take your time and don’t rush things. You are almost certain to regret it later on.

And van build guides are super helpful for measurements, with YouTube being definitely number 1. But be careful because there are a lot of people who don’t know what they’re doing there! And also Facebook groups are great for asking detailed questions that you can’t find online.

If you’d like to find more information about the van’s look and feel be sure to connect with Lauren and Jon on Instagram and Tik Tok!

Christopher Harvey is the founder and primary content creator for Called To Wander and Van Life Movement. He lives and travels full-time in his RV with his wife Lindsay and their two Australian Cattle Dogs. Passions include helping other people understand how to life a nomadic RV lifestyle and studying and planning an epic van build to drive the Pan American Highway in 2023.

We use cookies to ensure that we give you the best experience on our website. If you continue to use this site we will assume that you are happy with it.Ok